Grow Your own Fodder

So many people are joining the growing movement of looking and thinking carefully about what they eat.  Many people are choosing organic foods or making the decision to grow their own food to avoid environmentally detrimental farming practices or simply to ensure the food their family eats is healthy and chemical free.

Too often, the concern over our own food doesn't extend down to the food we feed our animals.  In addition, the cost of some animal feed has gone up.  Choosing to feed your animals sprouted grains provides more control over the feed you give your animals and can also save you money. Fodder is animal food given to domesticated animals.  For small-scale farms or the backyard homestead, sprouting your own grains to feed your animals either as a replacement or a supplement to commercially produced food is a great way to get more involved in what your animals eat.  By sprouting grains, you actually increase the nutritional value and make more of the protein available to the animal.  Barley seed has a protein value around 12.7 but increases to over 15 when sprouted!  Plus more of that protein is actually available in the sprouted form.

Just by adding water to certain grains and giving them time to grow, you can quadruple (or more) the amount of food you have for your animals.  While I can't turn $1 into $5, I can turn a pound of seed into 5 pounds of animal feed!

Where can you get Grain?

A variety of seeds can be used to sprout your own grain, although barley seems to be the most common due to how easy it is to grow.  You can also use wheat, oats, sunflower seeds, etc.  For my current project, I used a chicken feed mix from Incubator Warehouse.  Their website has a great list of all the benefits of sprouting grain for your animals, and this feed has not only sprouted well, but has a delicious mixture of seeds for laying hens and well as a mix for general barnyard animals (including rabbits and goats). 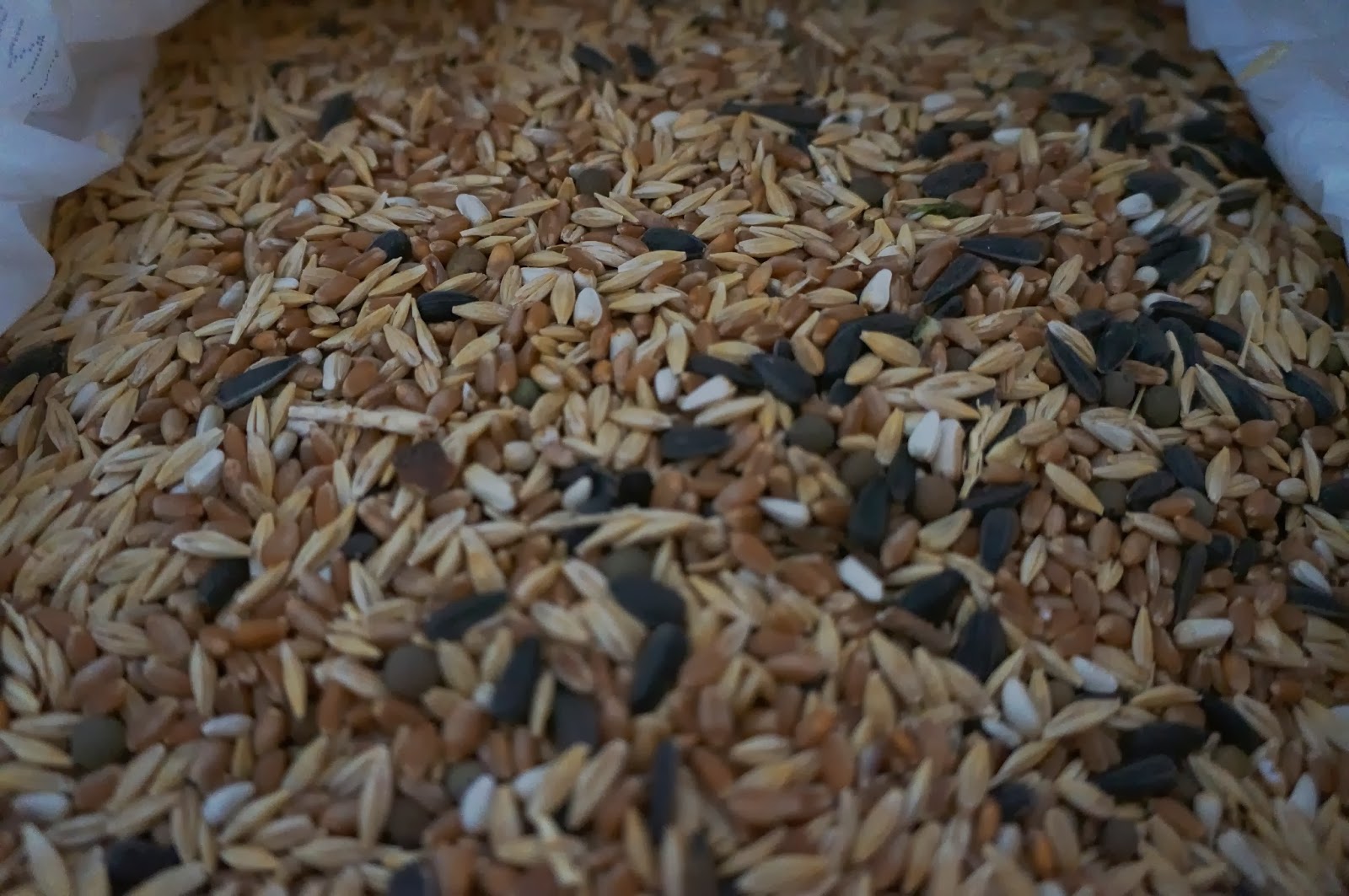 How to Grow Fodder

Growing sprouted grain fodder is truly a simple process.  Ultimately what you need is seed, water, a containers and light.  There are many complex fodder systems, but for the home set up you will have the most success if you can keep it simple.  As long as you are harvesting the fodder in 7-10 days you don't even need a lot of light or nutrients. 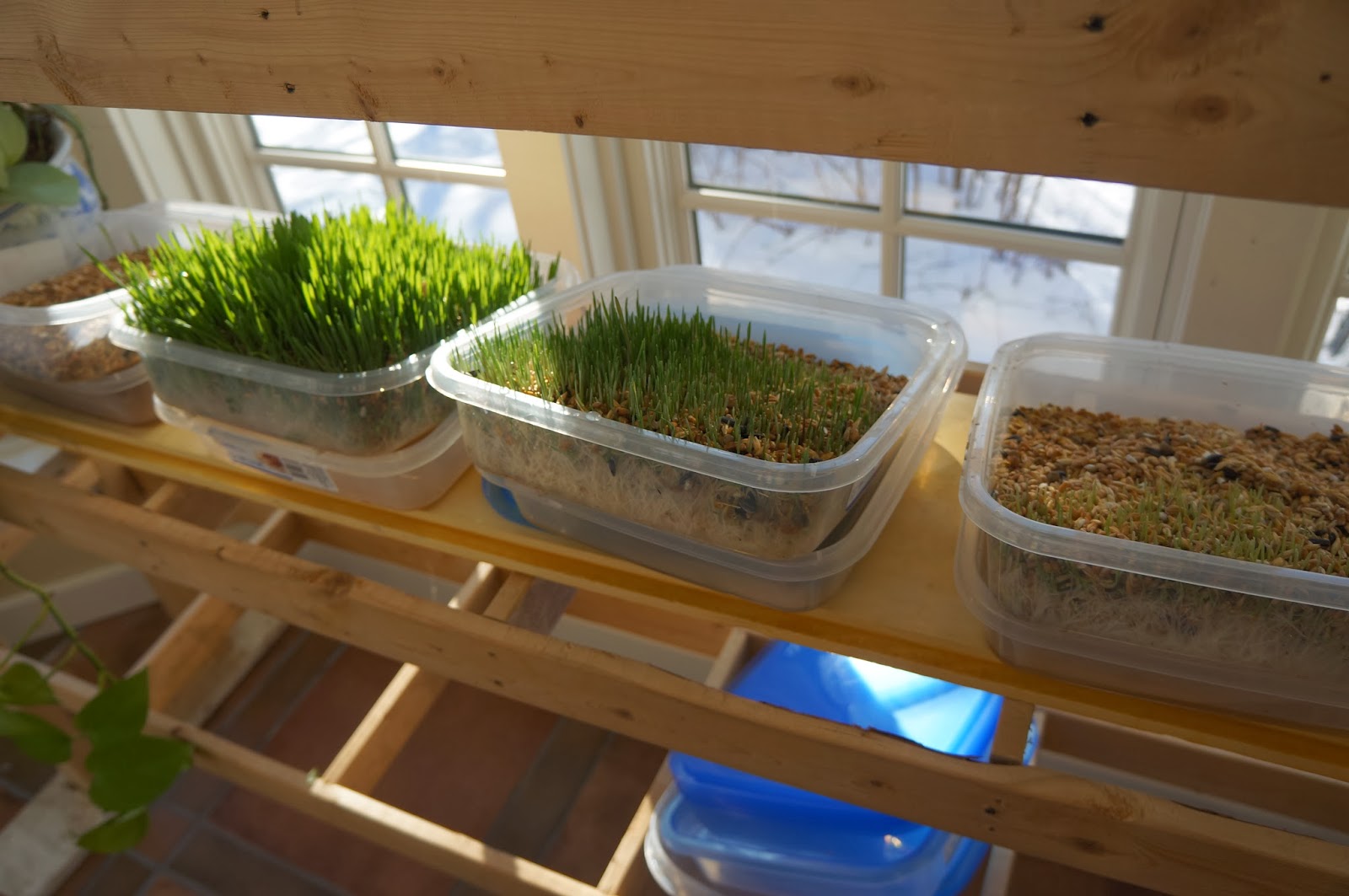 For our fodder system we use a series of plastic trays with holes punctured in the bottom.  We keep the trays (which I bought at the dollar store) on a shelf near a south facing window (although this much light isn't necessary).  Currently each tray of seed sits inside another tray and I simply rotate the trays on an angle each day so the water drains out.  I have all these idea of an elaborate system, but for now this is simple.  The grain grows best when the temperature is kept in the 60s and 70s, so this sunny space works since it's one of the warmest in our cold house.

Growing the fodder takes about 9 days.  Start by filling the container about 1/3 to 1/2 inch full of seed.  You can also weigh your seed if that is easier once you know how much seed it takes to fill your container. 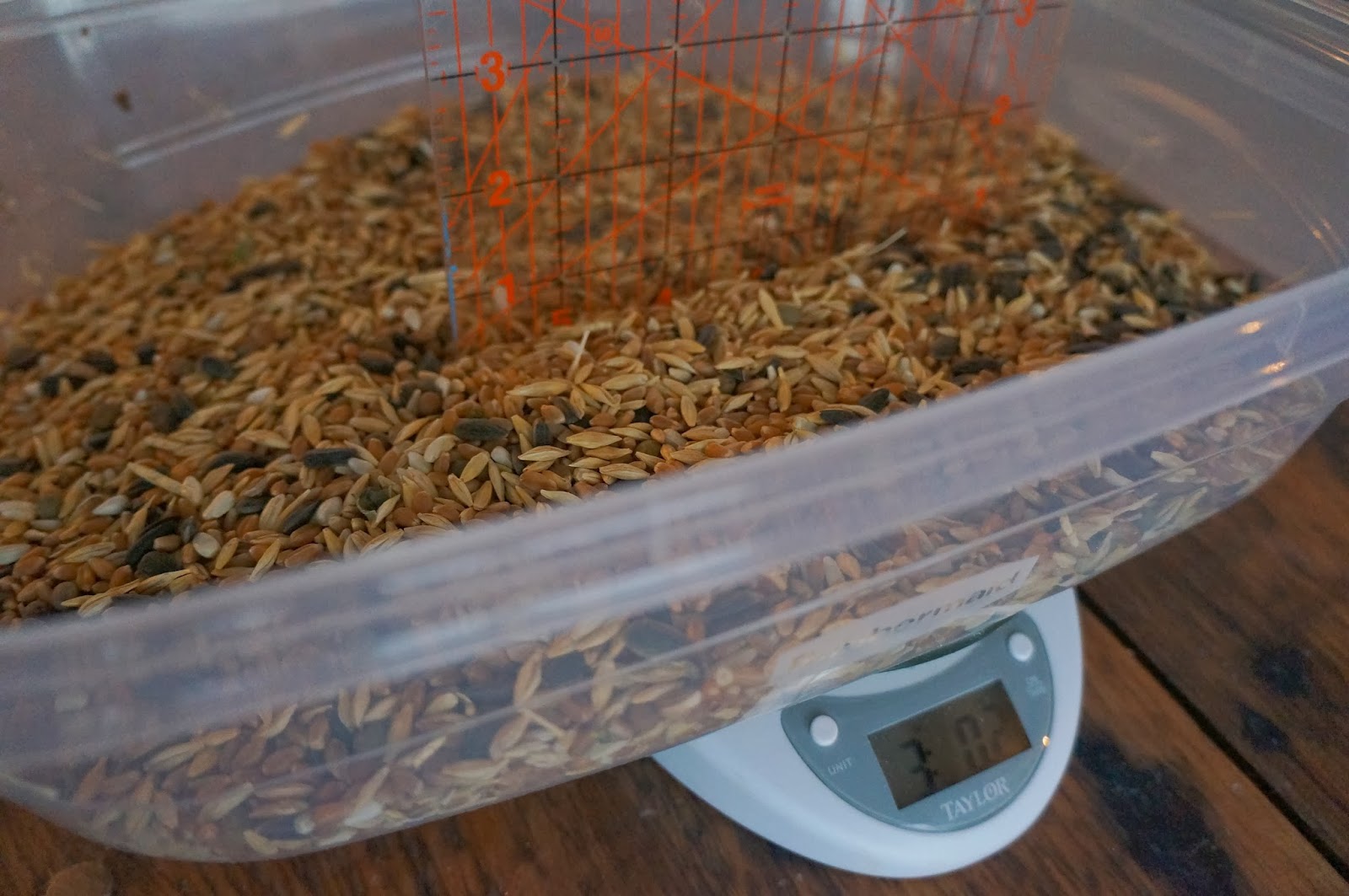 Next you need to rinse the seed and allow it to soak.  Generally we let the seed soak overnight, but it seems to sprout best when soaked at least 12 hours.  After 12 hours drain the water and put the grain into a container with holes.  If you allow the grain to sit in water too long, you will encourage the growth of mold. 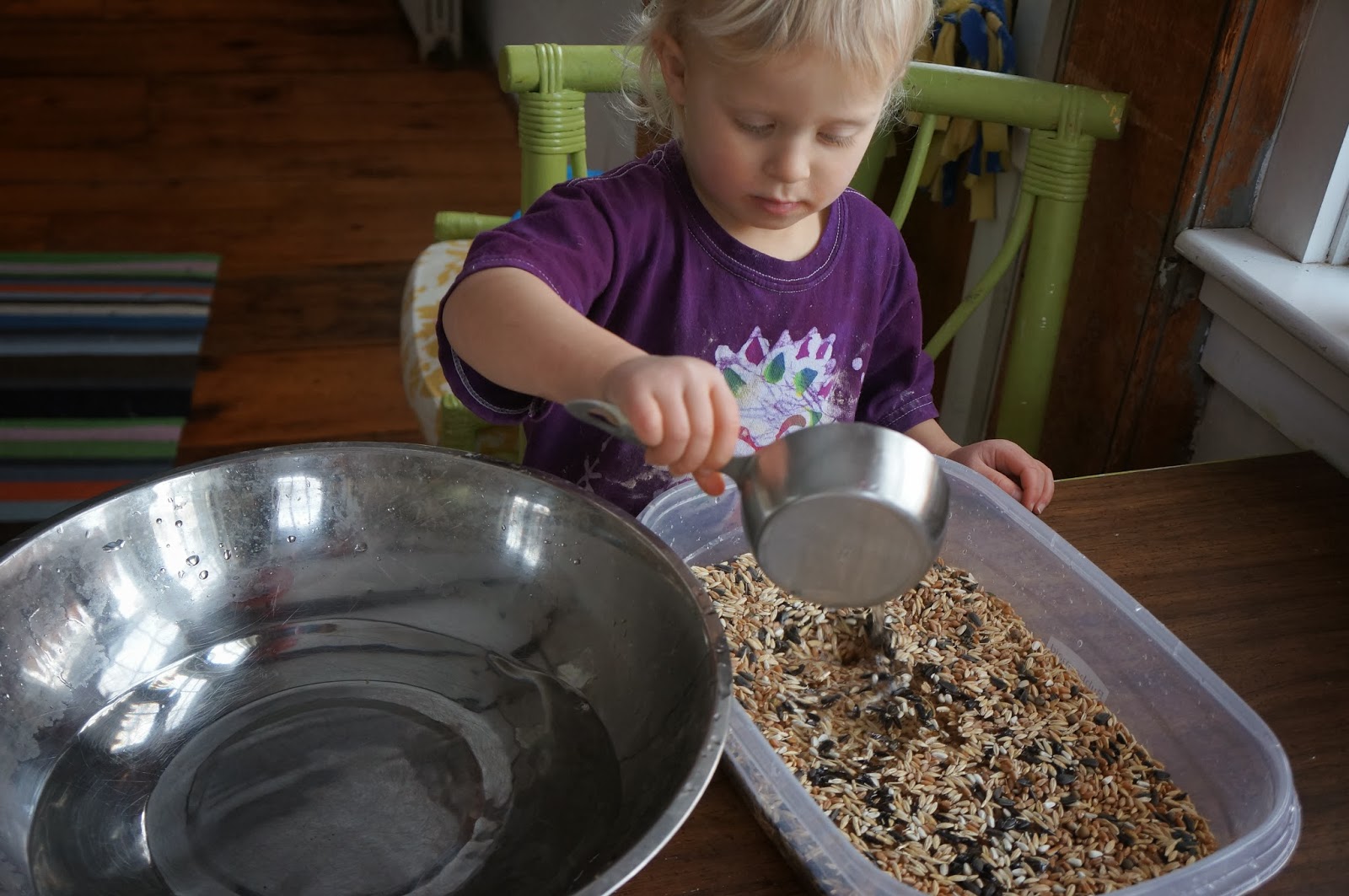 For the next 8 days or so water your grain twice a day, but make sure the container drains so the seeds aren't sitting in the water.  After a day or two you will start to see small roots sprouting, followed a day or two later by green stems, and the growth will eventually fill in.  Harvest the fodder when it fills in and is up to 6 inches tall.  When it's time to feed the fodder to the animals, feed the entire container including the seeds.  You can find a great list of how much to feed different animals here.  Make sure to clean your fodder containers to discourse mold growing in your next batch. 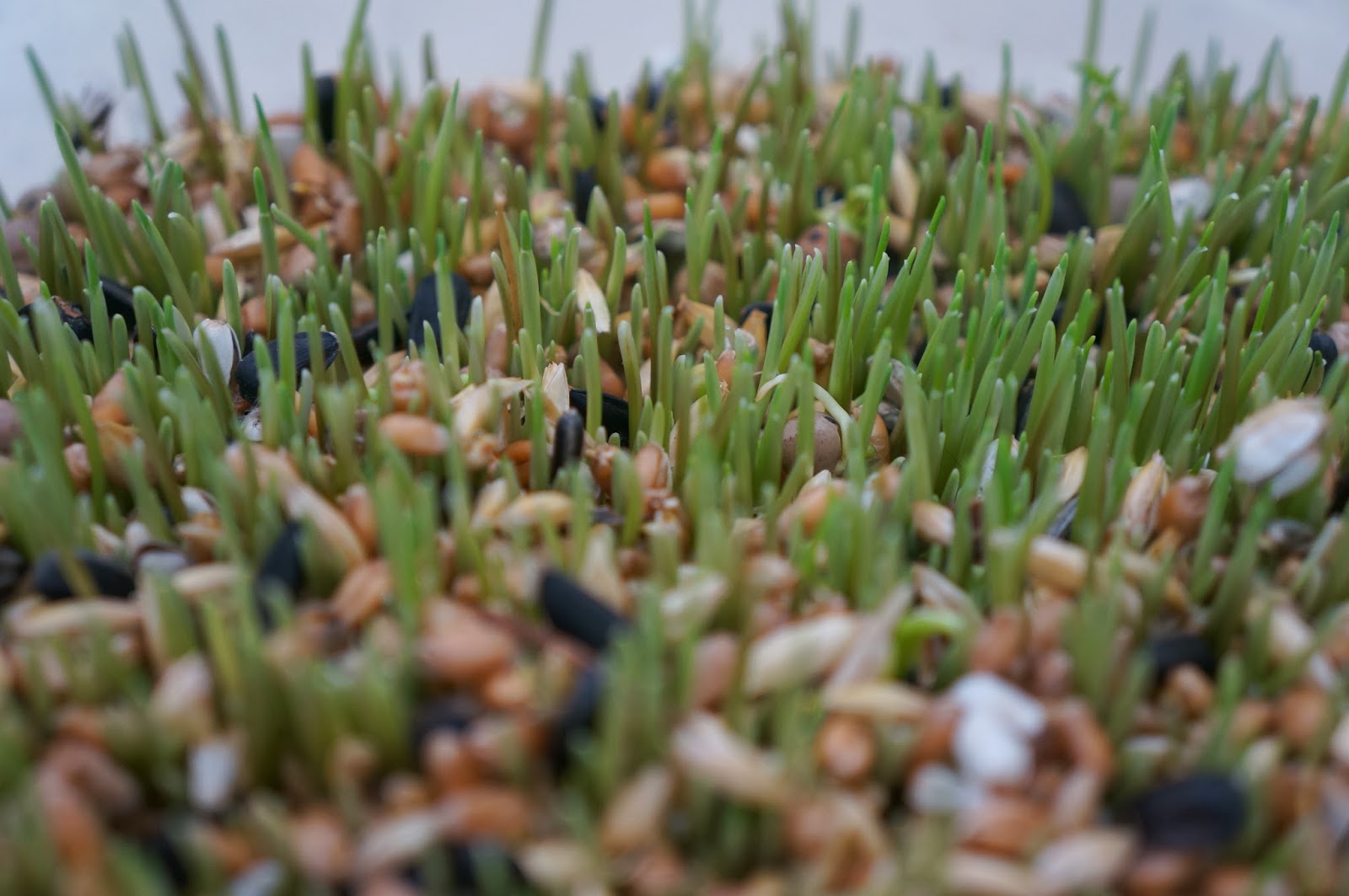 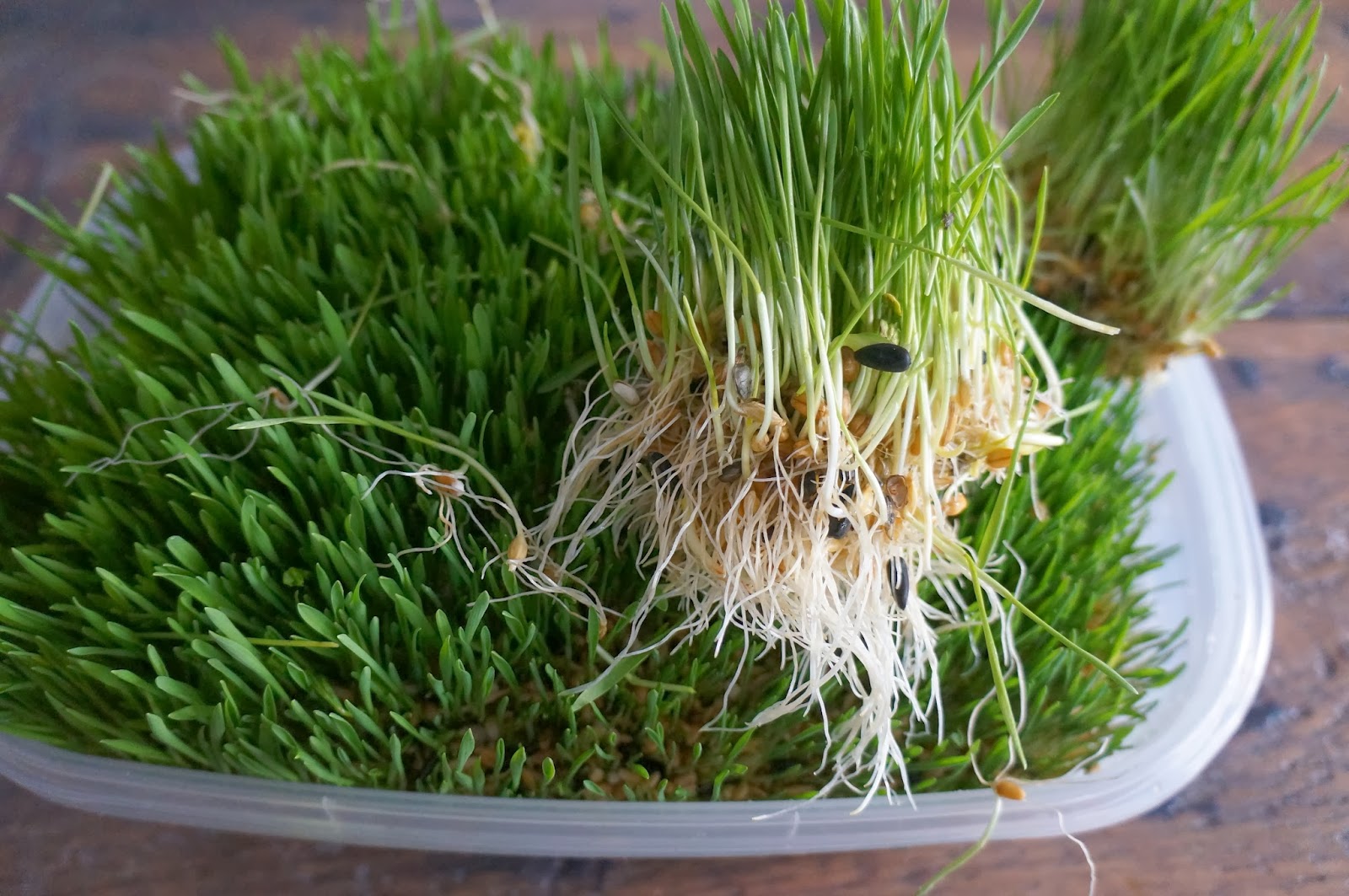 When I first introduced the fodder to our animals, there was moment of uncertainty.  Within just a minute, the chickens were eating, it took the rabbits a couple minutes, and the goats just nibbled and walked away.  I still have hope that the goats will be won over and I've heard other people have had success feeding sprouted grains to goats, but for now the chickens go crazy when they see the fresh greens.  We still aren't producing enough to feed the animals exclusively, but I hope that we can expand our system over the coming months.

Feeding our animals a fresh, green, food despite the snow on the ground is a great step in moving closer to self-sufficiency and is a quick, satisfying project to add to our daily routine. 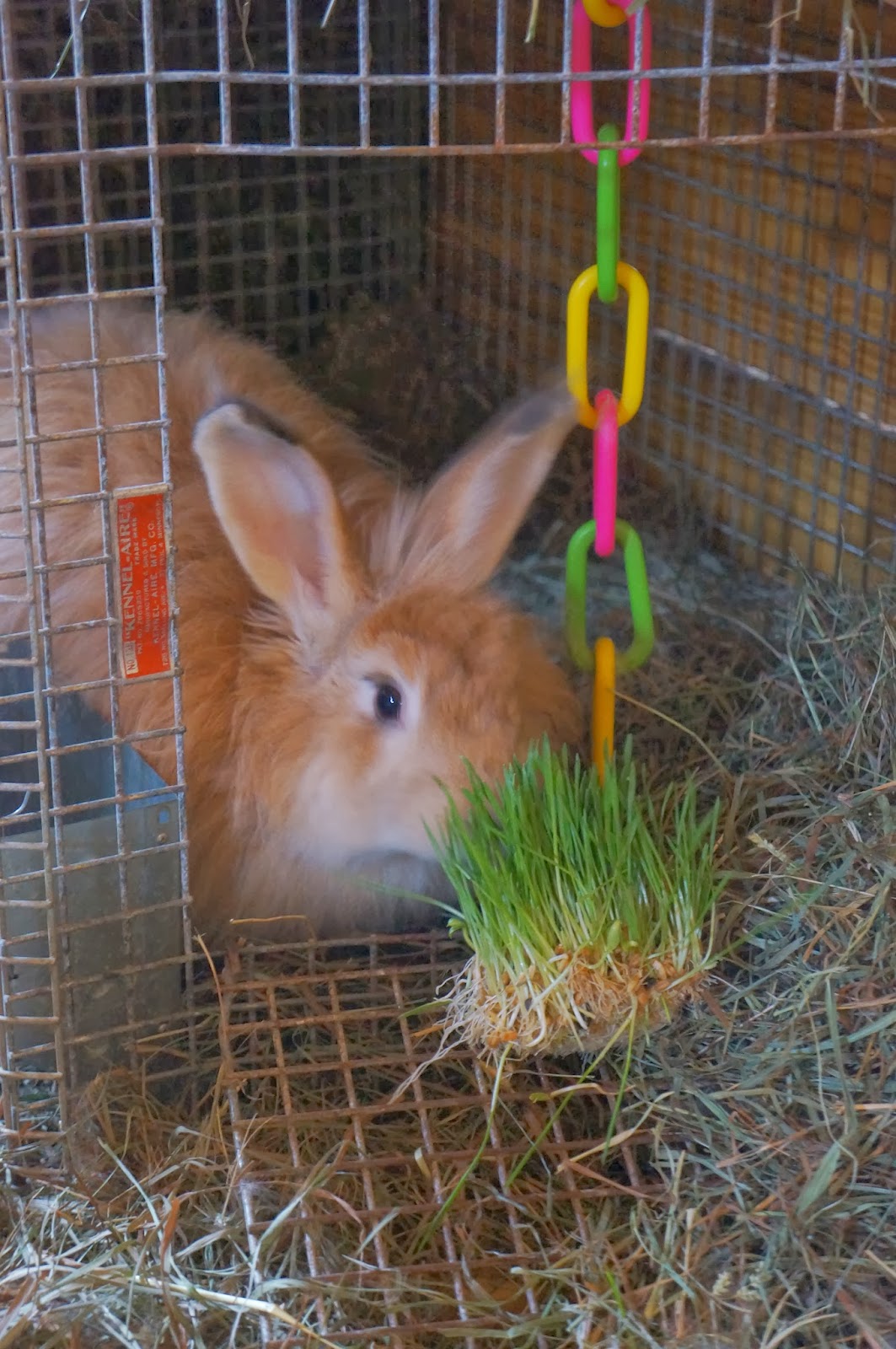 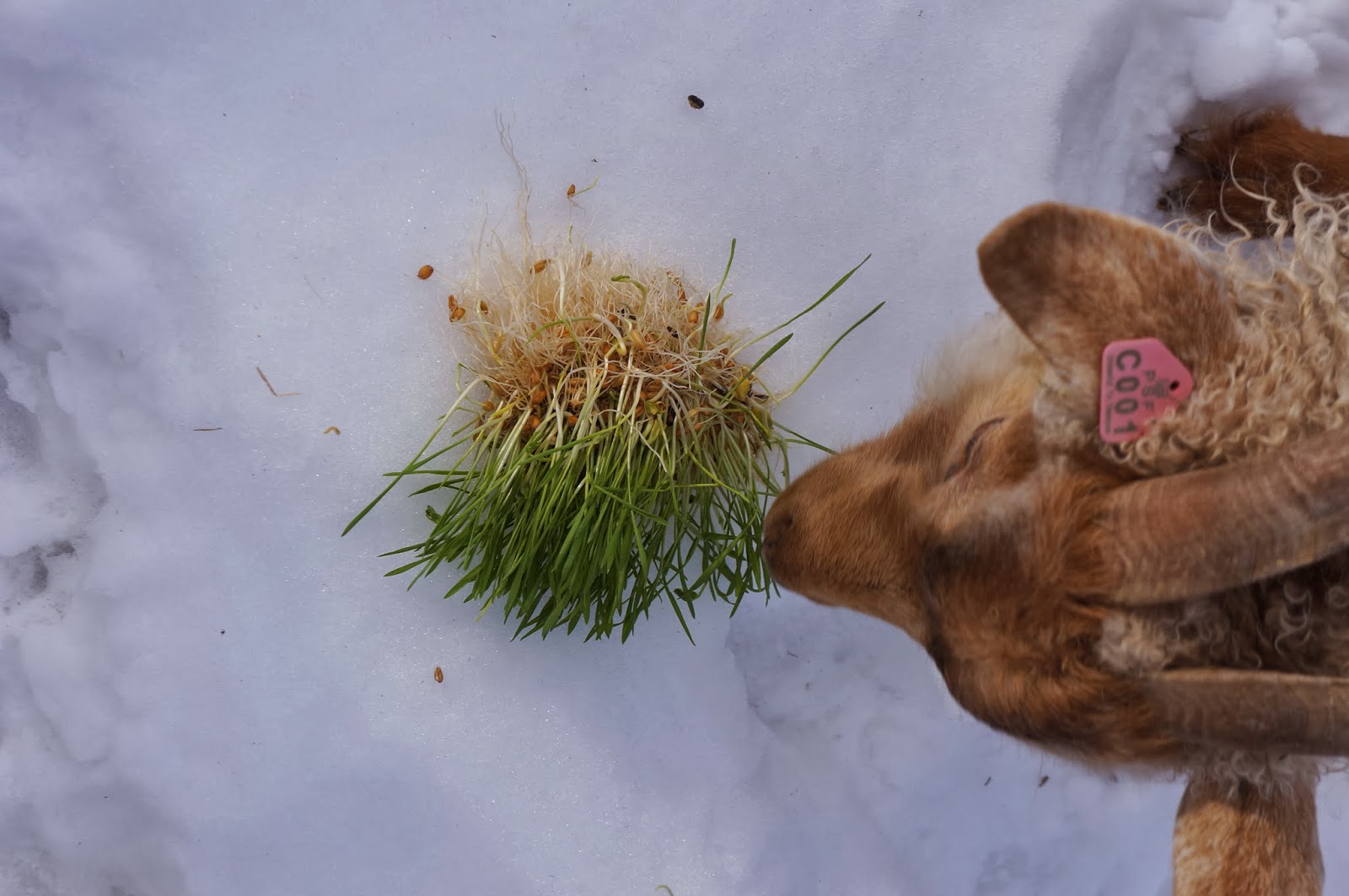 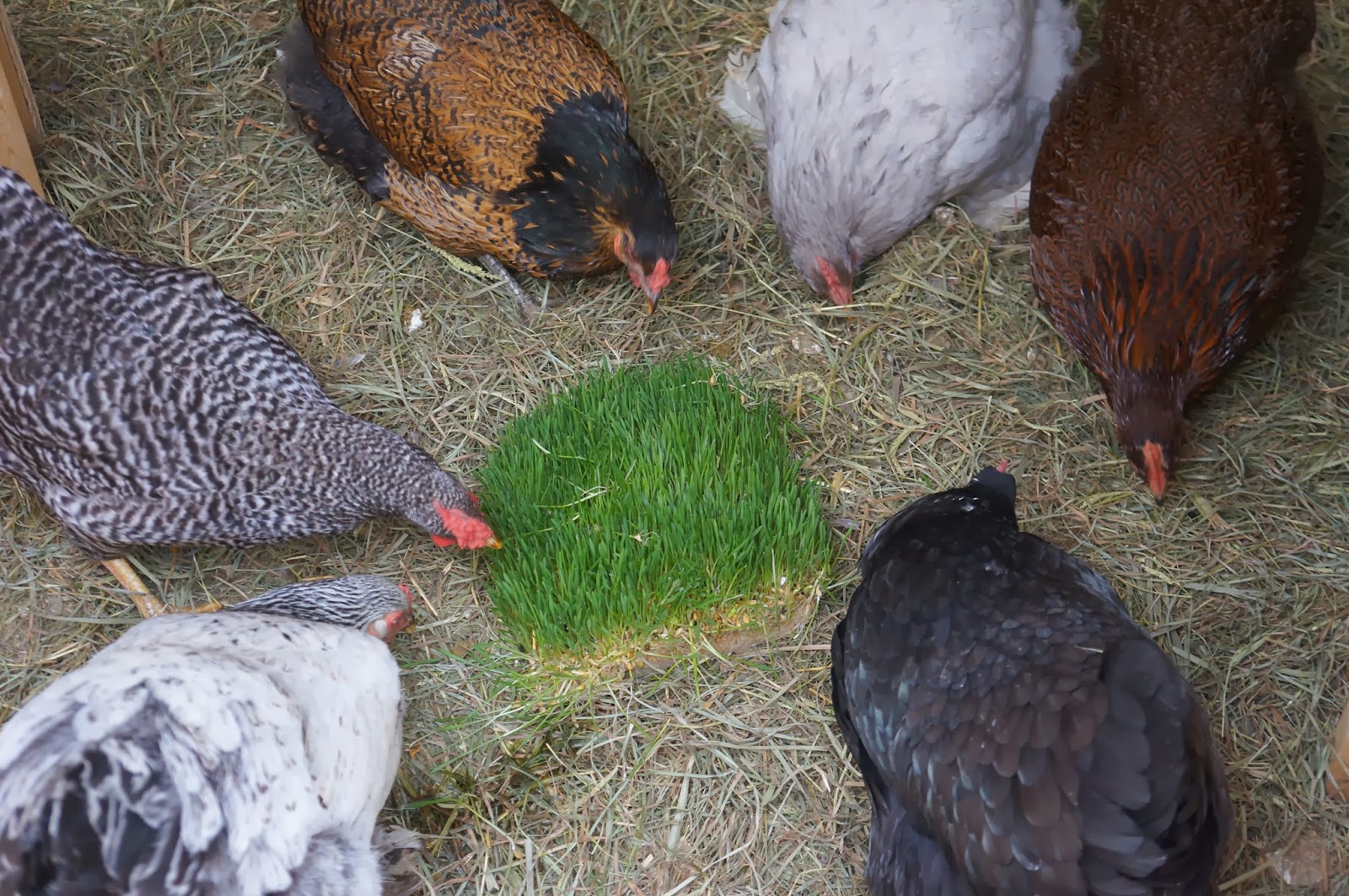 There are many great resources out there about growing your own fodder - check out the series of posts here.  Good luck and check back in to let me know how it's going!

There may be affiliate links in the content above.  The fodder for this post was provided by Incubator Warehouse.