Long before the modern day weather forecaster, people used the world around them to make predictions about the weather.  Many of these observations and sayings became widely used and passed through the generations right down to us.  So, are these weather sayings still useful?  Do they apply all the time or just in certain places? Today's article is all about some of these weather sayings and what they mean for us modern homesteaders and backyard farmers. Become your own forecaster by using the signs all around you. 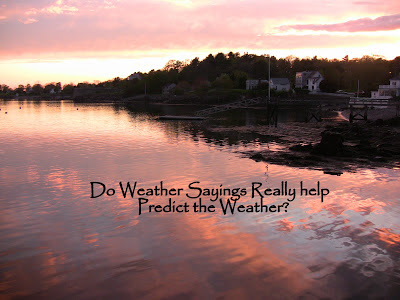 This is part 3 in a 4 part series where I discuss the importance of weather and climate for the backyard farmer.   If you missed the first two posts, you can catch them here:

Here are some popular weather sayings and to some thoughts behind them...

The Louder the Frog the More the Rain
Since warm moist (humid) air causes sounds to travel more quickly and causes it to sound louder, so on hot, humid nights when rain is likely, the frog (or any other sound) will probably sound louder.  A similar saying is based on the same idea: Sounds traveling far and wide, A rainy day will betide.  If your ears are attuned enough to pick up the volume of a frogs call, by all means, use this one.


A cow with its tail to the west, makes weather the best; A cow with its tail to the east, makes weather the least.
Since a cows tail could be controlled by the wind, the direction a wind blows brings different weather in different regions.  This saying is likely most useful only in certain regions, so don't spend too much time analyzing your cows tails.  This is actually most likely referring to 'mare tails' or high wispy cirrus clouds.  Still not the best general indicator of changing weather!

A ring around the sun or moon, means rain or snow coming soon.


When air is humid you are likely to see a ring around the sun or moon.  This is a possible indicator that precipitation is coming your way.

When grass is dry at morning light. Look for rain before the night.
Dew on the grass, rain won't come to pass.
Dew forms on grass when the air temperature drops below the dew point, causing water to condense on the ground.  You are most likely to get dew when it a- gets colder at night than normal or b- is really moist c - is calm.  Since calm nights are generally associated with stable air, you aren't as likely to get a storm.  If there is no dew by daylight, it is possible that wind has evaporated it and a storm could be brewing.


The higher the clouds the better the weather.
This one is right on the mark.  High clouds indicate fair weather.  If you notice increasing and lowering clouds, you can expect some sort of unstable weather approaching.

Chimney smoke descends, our nice weather ends.
Since smoke is warm, it generally rises.  Sinking smoke indicates that the air outside and above your chimney is warm.  In some instances this may mean warm, stormy weather coming in.


If bees stay at home, rain will soon come,

If they fly away, fine will be the day.


I guess the best explanation for this is that bees don't like to fly in the rain and are better weather predictors than we are.

When clouds look like black smoke a wise man will put on his cloak.
Heavy, dark clouds mean that the clouds are thick and less sunlight can get through.  Rain is likely, so by all means, grab a coat.

A rainbow in the morning, is the shepherd's warning
A rainbow at night is the shepherd's delight.
A rainbow forms when sunlight passes through water and the light is reflected.  You can see a rainbow by putting your back to the sun and looking towards a rainstorm.  In the morning  you would be looking West to see a rainbow and in the night (evening) you would look East.  Since many storms travel west to east in the mid-latitudes, a rainbow in the morning means rain in the west coming towards you.  In the evening, the rain is in the east and is moving away from you.

Red skies in morning, sailors take warning, red skies at night, sailors delight.
This is based on the same idea as the last saying.  Since red skies are caused by light passing through water in the air, in the evening a red sunset means there may be rain to the West that will be coming towards you.  In the morning, a red sky with rain is in the East and is moving away from you.

When the chairs squeak, it's of rain they speak.

The winds of the daytime wrestle and fight,
Longer and stronger than those of the night.
Since winds are caused by moving parcels of air (caused by different densities of the air), winds are likely stronger during the day when the sun heats the earth unevenly causing the warm air to rise and creating wind.  Storm system and passing weather can change this, but it is a 'mostly' true saying.

When the sun shines while raining,
it will rain the same time again tomorrow.
You are most likely to get sun during rain when the rain comes from a small isolated summer afternoon shower (not a larger storm system).  During summer months, you are likely to get several days in a row where afternoon showers pass through an area - thus the sun and rain indicating more rain tomorrow.

Clear Moon, frost soon.
On clear, calm nights, cold air settles to the ground, increasing the chance of a frost.

Count the cricket chirps to tell the temperature.
This indeed works - the warmer the air the more a cricket chirps - for those interested, here's the formula (let me know if you get it to work)!
(# chirps/minute - 40)/4 + 50 = temp in F

Here are several things said to happen before a storm:


When your joints hurt, a storm is coming.
Low pressure causes arthritic pain, and low pressure usually means a storm is on the way.

Have you used any of these sayings to predict the weather?

Are there other favorites that you use?

Email ThisBlogThis!Share to TwitterShare to FacebookShare to Pinterest
Labels: weather